One of Tornado Plumbing clients in Mississauga area had a flood problem in their basement and need a sump pump installed. They have a concrete floor in the basement, so all we had to do is to create a hole in a concrete floor down flush with a floor level. 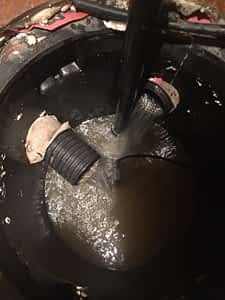 We were lucky to have the stone under the concrete, which implied that all the water would easily drain down to the hole with the pump. After digging a hole we had to install the basin with a cut off bottom there. This way the water would easily get into the basin with the sump pump and the level of the water in it will be the same as under the concrete. It is important to put the filter fabric under the basin, so that any of the silt will be filtered and the pump will be protected from dirt with could cause clogging. On top of the fabric we put some clean stone, just to keep it down and prevent from being sucked into the pump. We also put a paver on top of the stone to avoid any small stone from getting sucked in and it also creates a flat surface for the pump to sit on.

Then we put the pump into the water just to make sure it is properly leveled and that the switch is on the correct height. Next step was piping up the pump, we attached a one-way pipe at the 45 degree angle to the wall. Then we laid the pipe along the wall strait up to foundation and installed the PVC pipe to come out of the wall along the ground to the point where the grade slops down to avert the water from the house and prevent it from going back to the foundation.

Voila the job is done, then we just fixed the concrete around the basin and clean up, to make sure everything looks good as if there was no construction anywhere close!

@quentindty Hi, I found great code to update javascript without reloading the page, I really like it so much so I w… https://t.co/iqzbLCCSVe
03 May 2020
Some people die at 25 and aren't buried until 75.
02 Mar 2018
We are born crying, live complaining, and die disappointed.
02 Mar 2018
Call us today to inquire about our special discounts and promotions

Call us and get it done

When you hire us for our services, you know you're getting highly qualified professionals who have the expertise and experience to make sure your project is done properly
and on time.
Get A Quote